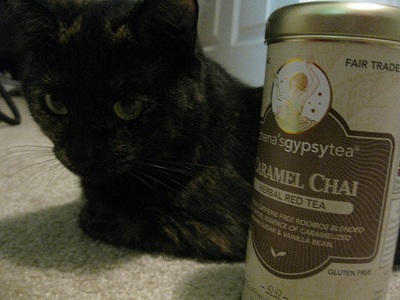 The moment I knew that I was to steep Zhena’s Gypsy Caramel Chai tea, I had my assistant cancel all my calls and clear the afternoon appointments. Zhena doesn’t play, and my breakfast beverage gears started turning mad rpms as to how I was to ingest.
First steep, plain.

This Caramel Chai is one-of-if-not-the bomb. With a silky introduction, the chai nuttiness creeps up on your palette like a smooth operator, and then your mouth is left with some sort of residue that can only be described as “healthy”.

Accessories aren’t necessary, but the potential to emulate a 7 dollar drink was right there. I went overbudget by adding:

You can already imagine the fireworks that went off after steeping this. Safe to say, this gets an A.

Once in a blue moon you get a chai tea that is so popping, you forget that you don’t even like chai that much.  That once in a while just happened here.  Zhena’s Gypsy Tea Caramel Chai is off the hook.
Let me describe the scene for you: an internet marketer sits quietly in his room twerking on his latest money-making scheme.  He starts feeling tired and decides it’s time to steep some love.  He opens the tool box he received from Dax and picks out a tool.  The instant he drops it into the hot water, the entire room fills up with the smell of cinnamon and cardamom, a smell so rich I knew it would go without a hitch.  He waits 5 min and sips.  Don’t stop till you get enough come on, the steep don’t stop.  He burns his tongue because he can’t get enough.
The caramel is a spectaculus touch and Zhena’s tea comes through again.  If you ain’t buying Zhena’s Gypsy Caramel Chai, you a fool.
Rating: A+

No comments Zhena's Gypsy Tea
You can follow any responses to this entry through the RSS 2.0 You can skip to the end and leave a response. Pinging is currently not allowed.