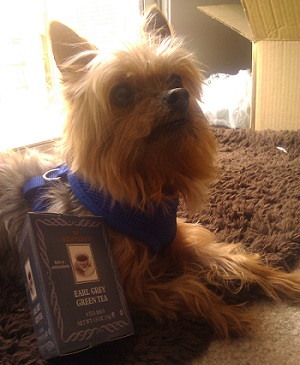 If you’re buying Earl Grey tea, you’re probably buying it because you like to savor that bergamot flavor. Otherwise you’d be enjoying that black tea goodness sans bergamot. Do yourself a favor and skip Bentley’s Earl Grey tea, where beramot was an obvious afterthought. It’s kind of like watching these 3D movies that weren’t filmed in 3D but then had the 3D added post production so they could sell some glasses. The black tea base is sub-par as is, so this is like Clash of the Titans.

Well Bentley, you offered me such a great amount of tea for a low price, how could I resist? I mean, I came into Marshall’s looking for cheap soccer jerseys and possibly a nice long sleeve button down. When a healthy sized tea sampler presents itself to a teasan, yakwii. Bentley’s Tea is usually meh-at-most, but of course I gotta steep everything for the goodness of all you steepers out there. Bentley’s Earl Grey Green Tea was on the plate today. Was there even a need to bring green tea into this situation? I say nay, but Bentley say yay. Too bad this weak, bergamot-less earl grey did just amount of justice as the O.J. trial. The taste just wasn’t present enough to justify either leaf, but if I had to say it was closer to the EG than green tea.

On a second steep, still the same synopsis. Earl Struggle faces 10 years solitary confinement in the back of the cupboard.

No comments Bentley's Tea
You can follow any responses to this entry through the RSS 2.0 You can skip to the end and leave a response. Pinging is currently not allowed.